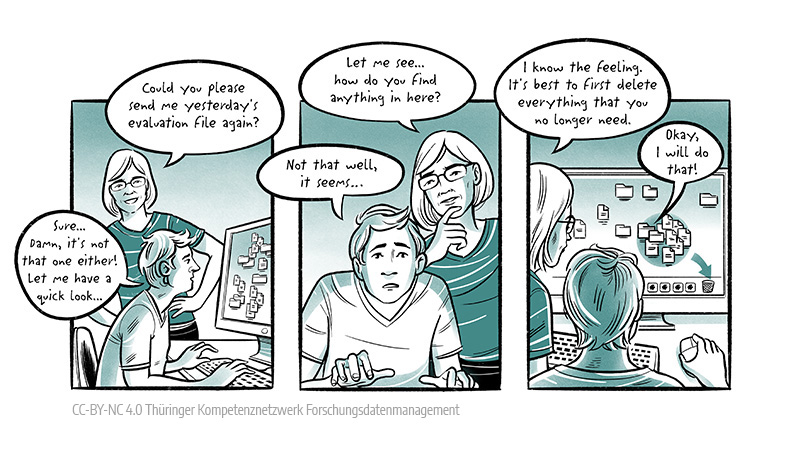 In the first step "Sort" unnecessary data in the project should be deleted. This not only reclaims storage space but also helps you keep track of the most important data and helps you, as well as other employees, to find your way around in a smaller number of files. There are several things to keep in mind during this process.

Firstly, duplicates and old versions of files should be deleted. Even though people like to keep them as backups, the actual backup should be done by a system. It is practically impossible to manually back up all of one's files. In addition to the time it would take to do this, you would also quickly lose track of all the versions and copies. It is therefore recommended to use a backup system that creates automatic copies (e.g. according to the 3-2-1 backup rules) and to use a versioning system that documents work steps on the files and makes files easier to restore.

Various temporary files can arise during project work. Many programs generate these, for example, to log their processes, to temporarily save files for certain sections or to restore project data in the event of a crash. At the end of the project at the latest, you don't want to store these files anymore. It is therefore advisable not to use a versioning system (such as git) to log unwanted files (using .gitignore). A command can be used, for example, to instruct the system to delete all unwanted files in a project (like delete all files that end with ".temp"). Of course, it should be carefully analyzed which files are still important for the programs and which can be deleted without problems.

A final point is the fact that certain files simply cannot be deleted or should not be deleted at this time. This is often the case, for example, when a permanent application (such as a server) accesses a file over a long period of time and this file is locked for other operations (such as deletion operations). However, to prevent this file from being forgotten, it should either be moved (if possible) to a folder whose contents are marked for later deletion, or the file itself should be tagged. Some systems allow you to give files tags or similar markings that make it easier to find the files to be deleted later.